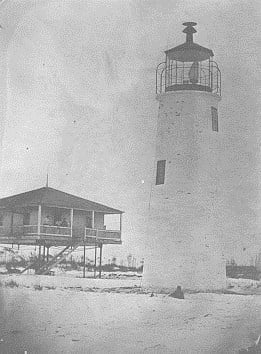 Congress appropriated funds for a replacement in 1874, but the  Lighthouse Board stated, "This light can only serve a local commerce, of which, for several years, there has been little or none; and it is therefore recommended that the new work be indefinitely postponed." The Dog Island Light was never replaced. The Crooked River Light (built near Carrabelle on the mainland in 1895) serves as a leading light for the same channel that was formerly marked by the Dog Island Light.

In 1999, a team of maritime archaeologists led by Chuck Meide, as part of Florida State University's Dog Island Shipwreck Survey, acoustic and electromagnetic devices, side-scan sonar and  magnetometer were used to search the waters off Dog Island.  Project archaeologists conducted excavations on the wreck of the 1899 Norwegian lumber ship Vale, and also located a number of other submerged archaeological sites, including the ruins of the Dog Island Lighthouse.  The submerged brick ruins are now located on the offshore side of the island, as the island itself is slowly migrating towards land and has passed completely over the lighthouse's original position inside the island. The site was re-investigated by Florida State University archaeologists as part of a 2006 summer field school, and various features of the lighthouse—including remains of the keeper's house, were found.