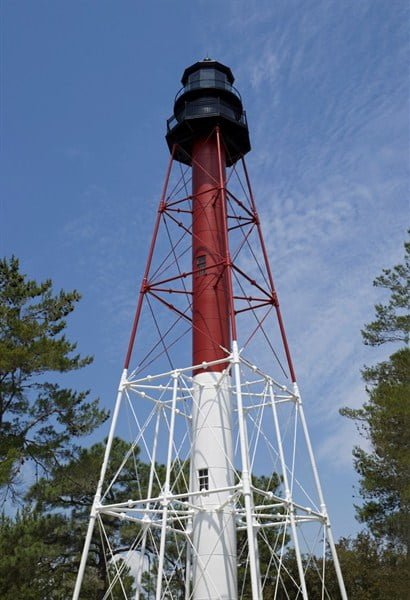 Join the Carrabelle Lighthouse Association with memberships starting at just $15 & you can climb the 138 steps to the top of the lighthouse FREE on every day that we are open (Wednesday - Sunday)!

Nestled in a North Florida forest habitat, the lighthouse beams nightly, with an acrylic replica of its original 4th order Fresnel lens.  Grant funding helped the Carrabelle Lighthouse Association (CLA) to construct a replica of the Crooked River Lighthouse Keeper’s House which was patterned after the original 1895 plans and was completed in 2009.  Inside, both the history and the science of the lighthouse are being interpreted via fascinating exhibits and an educational movie, along with a gift shop. Exhibits include a historical setting of the early 1900’s, examples of beacons and the methods of constructing a skeletal tower lighthouse.  Everyday life objects in the Keeper’s Room include its original clocks, a barometer, a glass fire grenade, pages from the keeper’s watch book, currency and much more.  Visitors can look through replica Sears’ catalogues for a perspective on cost of living during the past century.  Group educational tours are welcomed and new science-based programs are being developed. Enjoy a climb to the top of the Lighthouse tower on Wednesday through Sunday (weather permitting). The park picnic area features picnic tables, picnic shelters and a small playground. Fundraising is ongoing to rebuild the wooden Pirate Ship, The Carrabella, which was lost to arson in 2015.

The Crooked River Lighthouse was built in 1895 to replace one on Dog Island that was destroyed in a hurricane in 1873. Authorities decided it would be better to have a lighthouse on the secure mainland rather than the exposed Dog Island.  Electricity came to the lighthouse in 1933 and it became automated in 1952. The lens was built in 1894 by Henri LaPaute in Paris, France. The lens was removed in 1976 and is now located in the U.S. Coast Guard 8th District Offices in New Orleans. The lighthouse was decommissioned in 1995. The lighthouse sat forlorn and isolated for a few years.  In 1999 a group of local residents formed the Carrabelle Lighthouse Association (CLA) and the City of Carrabelle obtained ownership of the landmark just weeks before being auctioned and created a public park surrounding it.  Private and public financial support enabled the restoration of the structure to be completed in December 2007.

The Crooked River Lighthouse Museum is funded, in part, by the Franklin County Tourist Development Council.

On Mother's Day morning in 2015 our beloved Pirate Ship Carrabella playground was destroyed by fire. It was a favorite place to play for many of our local children, a popular site for pirate themed birthday parties and a very popular place to visit for both children and adults from all over the country. The ship was also the stage and often the inspiration for performances at our fall Lantern Fest. Many people have expressed a desire to help the Carrabelle Lighthouse Association to rebuild the Carrabella. We have set up a savings account at our local bank with an initial deposit of $250 in donations we have already received. All donations received will go into that account and be used only for restoration of the playground. Thank you for helping us to bring back our beloved pirate ship playground.

There is a gift shop full of nautical, maritime and lighthouse-themed gifts!
Carrabelle Lighthouse Association is a 501c3 non-profit corporation

Like and follow the Crooked River Lighthouse for all their fun, family friendly events throughout the year.

Click here to watch a wonderful video from The Florida Channel